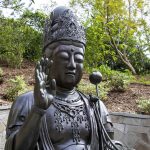 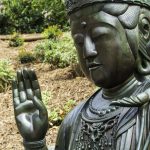 August 2019 (SAN DIEGO, CA) – It’s got quite the story! And here’s just a little bit of it: Originally made in 1735, this gorgeous cast bronze statue has traveled thousands of miles and brings an amazing history to the Japanese Friendship Garden.

Crafted by Takumi Obata, a highly accomplished Japanese ironsmith, the 12-foot statue called Kannon Bosatsu, represents a goddess of compassion and mercy and a Bosatsu (or Bodhisattva), a figure within Buddhism who has reached enlightenment but chooses not to ascend. Instead, a Bosatsu stays on earth in order to help others achieve enlightenment.

In 1930, the bronze was acquired from Japan by American businessman Rudolf S. Hecht, who had it placed in the Middlegate Japanese Garden in Mississippi. For over 70 years, the statue was on display until the devastation brought by Hurricane Katrina in 2005 destroyed much of the garden, leading to its permanent closure.

The Kannon Bosatsu was left exposed and in pieces until it was purchased by Mr. and Mrs. Gabrych, who donated it to the Japanese Friendship Garden in 2017. With funding from the California Cultural Historical Endowment, the County of San Diego’s Neighborhood Reinvestment Program, the Parker Foundation, and the donations of numerous individuals, the statue was restored to its original beauty and homed in a gorgeous new outdoor exhibition!

Every day, staff and volunteers are discovering new information and stories about this stunning work. So come enjoy it and a new pathway, stream, and viewing area at the Japanese Friendship Garden!

As you explore the Park into the new year, don’t forget to grab a Balboa Park Explorer Annual Pass! Enjoy complimentary admission to 16 amazing Balboa Park museums all throughout 2019 – with no blackout dates! What are you waiting for? Click here to check out a full list of perks!

What will YOU Explore? Be sure to share your memories with us! #ExploreBalboaPark